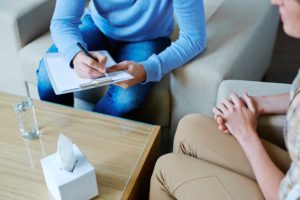 Over the past 30 years, a combination of diverse professional experiences and extensive training have made me the therapist I am today. In addition to a Master’s Degree in Social Work, I have participated in continuing education courses and seminars to ensure that I am incorporating the latest in psychoanalysis into treatment plans.

I joined the faculty of the Psychoanalytic Psychotherapy Study Center (PPSC), a post-graduate training institute, and served as the Executive Director for 10 years. During my tenure, I taught and supervised candidates, developed an internship program for graduate students, and worked to establish guidelines for training and licensure in New York.  My expertise is broad and far-reaching.

My current areas of specialty are:

Of late, more attention has been focused on the well-being of anxious, depressed and suicidal students on college campuses. I have worked with many students trying to adjust to life away from home. The social and academic pressures of college can bring about the emergence of major mental illness and addiction that needs to be addressed with the proper treatment. In addition to individual sessions, I also offer group treatment to college students and young adults.

Therapy for Women of all ages

I have extensive experience in counseling women of all ages who suffer from eating disorders. Today, there are a variety of treatments available; I’m able to help navigate through the options and figure out which will work best on a case by case basis.

As baby boomers are aging, they are learning that menopause no longer spells the end. Life after 65 continues to be an important, yet often overlooked part of adult development. I’m able to offer support in either individual or group therapy sessions for women navigating midlife and beyond.

I am affiliated with Here to Help Military and Families, a Long Island group that offers free counseling to returning veterans and their families. I offer a holistic approach to treatment; for both veterans returning from combat, suffering from the effects of trauma and PTSD, as well as their families, who are struggling to understand how difficult reentry into civilian life can be.
———

What can you gain from therapy?

Over the past 30 years, I’ve learned a lot about relationships and the value in sharing our thoughts and feelings with friends and partners. Knowing we are being listened to, valued and understood is crucial to emotional wellbeing.

Hope for the future

Therapy is a process. Though there is often no simple, quick solution, it provides a safe space to explore emotions, thoughts, and actions in an in-depth and meaningful way, to eventually bring about change.

Through continued treatment, therapy can be an incredibly powerful tool in helping to significantly improve your quality of life and outlook.

See my main site at www.LaurieSloane.com
and My Psychology Today Page

Blog Posts are Below:

Laurie Sloane was quoted in the following article written on InPlace, a project by a group of NYU graduate students. Their mission is to record and comment upon the changes and challenges brought on by the global COVID-19 pandemic.

What Will COVID-19 Change About Our Culture of Touching?

In Ancient Greece, you would expose your hand when you greeted someone to show you didn’t have a weapon. And to really make sure the other person wasn’t hiding a weapon anyway, you would shake their hand to see if anything fell out from up their sleeve. With that simple ritual to prove we were weaponless; the cultural norm of shaking hands was born.

Flash forward some two-thousand years, and the handshake is probably one of the greatest weapons of all. If you asked me last year, I would have shaken a stranger’s hand, no problem. If you asked me back in February of this year, I would have shaken a stranger’s hand and then applied a generous dollop of Purell. In early March, I had my first forearm bump, palms safely tucked in a fist. Now, the thought of touching someone’s hand feels like putting it directly into fire.

As the coronavirus spread to the US, two things I noticed were that I touched my face a lot, and more surprisingly, that we touch each other a lot too.

Anthony Fauci was quoted recently on a podcast saying, “I don’t think we should ever shake hands ever again, to be honest with you.” He believes the death of this societal mannerism would reduce the spread of other diseases aside from coronavirus, including the flu.  In India, people have started returning to simply performing the Namaste gesture instead of shaking hands.  In February, UAE citizens were encouraged not to rub noses while greeting each other. French leadership urged citizens to avoid kissing each other on the cheeks.

Touch is everywhere. It’s in the firm, “please-hire-me” handshake at the start of a job interview. It’s the “peace be with you” ritual at the end of Catholic Mass. It’s the high-five in sports and between friends. It’s the flailing, screaming, teenage girl hug. It’s the palm reader’s source of income.

It’s strange to think that a simple, two-thousand-year-old tradition would be gone in an instant.  Of all the abrupt changes and sacrifices being made, this one seems like something we can accept. But if it feels oddly empty to greet a stranger, a friend, or a coworker without showing some kind of physical interaction, it might be an opportunity to brainstorm a new societal mannerism.  It’s like choosing a new school mascot after hundreds of years of being the “Bears” or “Jaguars”—maybe it’s time to get creative.

Suggestions for alternatives are already floating around on the internet.  A pat on the back, foot taps, the elbow bump. There is a compulsivity about it—that we have to have something to replace the physical ways we acknowledge each other. Instead of just greeting each other verbally, there’s a need to have some kind of touch in place for it to feel okay.

Laurie Sloane, a New York-based therapist of over 30 years, can validate that: “As humans, we’re so driven by contact with each other. Touch is the basis of attachment when we’re born.”

Sloane describes that trauma in itself is “the lack of attachment.” She highlights one of the most blunt and painful ways the lack of contact is affecting society.

“What’s so terrible about this pandemic is that people are dying alone,” she said. “It’s terrible for the person who is dying, and it’s in some ways, even worse for the people who survive, because they can’t have this moment of closure together. They can’t touch, they can’t even communicate.”

Though she notes that there have been instances where healthcare workers have helped patients connect with their loved ones via FaceTime to say goodbye, it’s not enough, and it’s not the same.

Sloane has two therapy practices, one in Manhattan and one in Long Island, where she is currently quarantined with family. As expected, she is now seeing her clients over Zoom. While the technology makes these virtual sessions possible, Sloane can feel the lack of physical presence in her work. In person, Sloane says, she is able to “mirror a person—by mirror, I mean their facial cues, their gestures…matching them to some extent,” she said. “You just don’t have those cues over Zoom. As a therapist I have to work so much harder.” Sloane finds herself nodding and smiling to show that she is engaged with her clients, in ways that wouldn’t be necessary in person. These extra non-verbal cues through Zoom interactions, if anything, are preparing us for a bigger shift in how we interact.

“I think people are going to become much more reserved,” she said. “I think it’s going to take quite a while when this is truly over as a pandemic, for people to rebuild that sense of trust, body to body, and feel comfortable with each other.”

Sloane predicts that while the handshake and other forms of physical greeting won’t disappear entirely, people will have to adapt and strengthen their communication.

“I think they’re going to have to learn by necessity how to convey their point of view, what they’re thinking and feeling in ways that don’t incorporate touch,” she said. “Learning how to mirror people over technology, how to be more consciously impactful, and use words and facial expressions to communicate that.”

COVID-19 has changed our lives so drastically, but one thing we have proven is that no amount of distance will change our need to connect with each other. The real hurdle will be deciding if we can trust each other enough to get within 6 feet of a stranger.